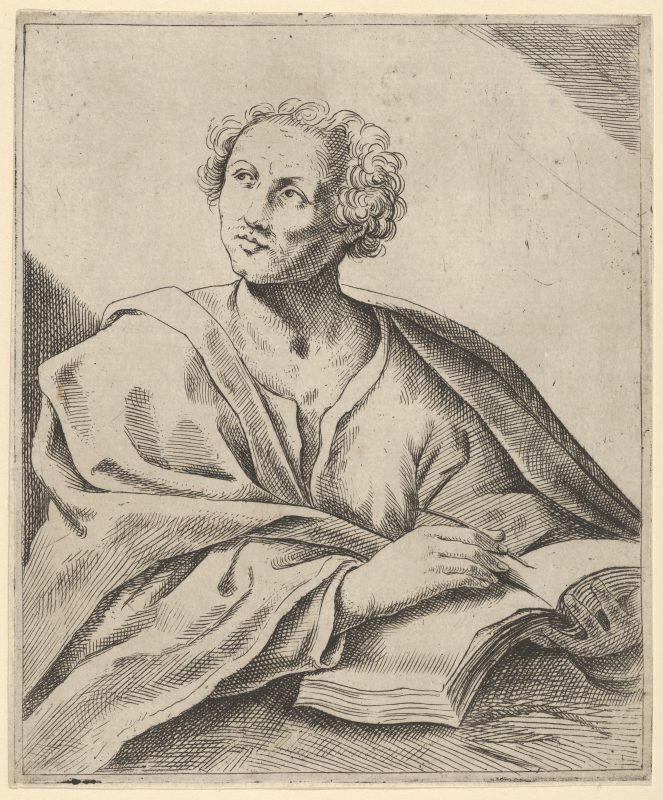 Anonymous (After Guido Reni?), “A man holding a book, about to write in it, looking upwards to the left, after Reni?” (17th century)

A young writer is tempted…to be guided by the known, the admired and the currently accepted, as he hears a voice whisper within himself, “Nobody would be interested in this feeling I have, this unimportant action – therefore it must be peculiar to me, it must not be universal nor generally interesting nor even right.” But…some other voice in that crossroads makes him write down those apparently exceptional and unimportant things and that and nothing else is his style, his personality – eventually his whole self as an artist. What he has thought to throw away…was the saving grace vouchsafed him.

To believe your own thought, to believe that what is true for you in your private heart is true for all men, — that is genius. Speak your latent conviction, and it shall be the universal sense; for the inmost in due time becomes the outmost,—— and our first thought is rendered back to us by the trumpets of the Last Judgment. Familiar as the voice of the mind is to each, the highest merit we ascribe to Moses, Plato, and Milton is that they set at naught books and traditions and spoke not what men but what they thought. A man should learn to detect and watch that gleam of light which flashes across his mind from within more than the lustre of the firmament of bards and sages. Yet he dismisses without notice his thought because it is his. In every work of genius we recognize our own rejected thoughts: they come back to us with a certain alienated majesty. Great works of art have no more affecting lesson for us than this. They teach us to abide by our spontaneous impression with good-humored inflexibility then most when the whole cry of voices is on the other side. Else, tomorrow a stranger will say with masterly good sense precisely what we have thought and felt all the time, and we shall be forced to take with shame our own opinion from another.

This site uses Akismet to reduce spam. Learn how your comment data is processed.